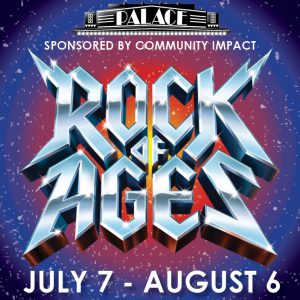 Brittany and I were cast in Georgetown Palace Theatre’s production of Rock of Ages.

This will be my first musical. First acting gig. Really, pretty much the first time I’ve taken any stage not behind a drum of some sort.

Nerves? You bet. It’s not the singing, so much. Learning the baritone harmonies is a lot of fun. It’s the acting. And dancing. Yes, I said “dancing.”

Don’t get me wrong, I’m not in a lead role by a longshot. I’m a proud ensemble member. But the ensemble gets a lot of stage time in this show. Most of the show, it seems.

But there’s a lot of dancing. And not just The Running Man or The Carlton (though you may see flashes of each if you pay attention). At least from my perspective, there are some pretty significant “real” dance numbers that are taking seasoned dancers quite a bit of practice to get down. So I’ve got my work cut out for me in dance rehearsals.

And the acting…  I’ve managed to get a couple tiny “parts” here and there, just a smidge beyond ensemble duty. I’ll dress in drag at one point, be a protester in another scene. I’ll be a rocker who slaps an innocent L.A. aspiring actress on the butt, and I’ll be a customer in a strip club…doing…uh…what customers in strip clubs do.

It’s those moments I’m most nervous/excited about. Other than various levels of “crazy drummer,” I’ve never had to portray any sort of character onstage before.

We’ve got another month of rehearsals ahead, and I’m looking forward to each one. The more reps the better. I mean, it takes a lotta gumption to portray a rough-hewn cross-dresser in front of an audience who isn’t necessarily expecting to see more than some 80s rock ‘n’ roll.

Come on out if you can…the show runs July 7 – August 6. Tickets are on sale now! It will be a sight to behold.