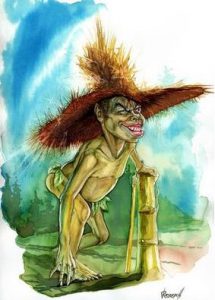 A duende is a fairy or goblin-like mythological creature

JT Martin, of Chasca notoriety, writes. Prolifically. If you’ve followed him on Facebook for any length of time, you know that his posts are epic in their grandeur.

During a Chasca trip to San Angelo, he and I once talked over the idea of getting his wildly diverse Facebook posts into a non-social media website. I loved the idea of the information architecture behind his content, that covers multitudes of historical topics, mythology, sexuality, humor, and oh so much more. Over the past few months, I’ve helped him make this idea a reality.

It’s not finished yet. There is still much culling to be done. Meta data. Categorization. Tagging. Pulling out a bunch of quick “come see Chasca tonight” sorts of posts.  But the site is really starting to come along nicely.

I’d planned to wait until the kinks were all worked out before I mentioned it, but he just published a piece that has some good meat on its bones. I think it’s worth sharing at this time.

Be warned, this is not for the faint of heart! It’s neither suitable for work nor something you’ll want to share with your children. It’s got raunch, smut, is quite disgusting and explicit in parts, not to mention it’s got hundreds of SPIDERS!!! Yowser!!! But it is a tale that shall be told.

His story weaves fact and fantasy around Chasca’s first trip to Brownsville. We played a wonderful little art space there called BAM, run by the nicest people in town. We stayed in a dubious no-tell motel just down the street, right there in downtown.

There are more truths in his story than you might imagine. I’ll leave the fact-checking to your imagination, though. And, to be quite honest, there are some parts of the plot that I have no idea whether they are fact or fiction…and I was there!

So, without further ado, please enjoy the haunting, perverse, and tangentially spiritual “The Bones of Cuauhtémoc,” by Seamus O’Sparks:

The Bones of Cuauhtémoc